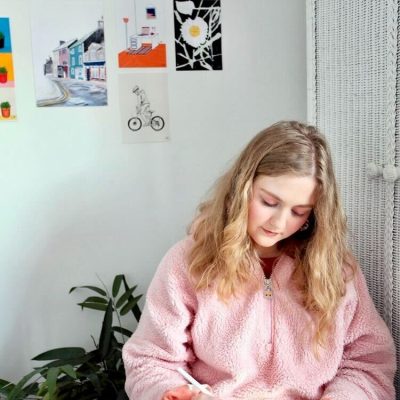 Throughout March, I attended the ‘Reimagine Remake Replay’ workshops every Thursday for the Augmented Reality Illustration Programme at the Mid Antrim Museum in Ballymena.  I had never attended a RRR programme before and a friend had recommended them to me as she had really enjoyed attending some RRR online programmes during lockdown.  I signed up to this session as I live locally to Ballymena and I have a passion for Illustration, currently studying Illustration at Belfast School of Art.  I also started my own illustration business called LJK Designs where I create a range of designed products using my designs.  Therefore, the illustration programme was right up my street!

When I walked into The Braid for the first session, I was met with friendly faces welcoming me to the programme.  Clodagh, Stephen and Hannah were very friendly, energetic and engaging throughout the programme and I Iooked forward to returning each week.

We started the first session with a tour of the museum, delivered by  Debroy, a Museum staff member.  I learnt about the history of many of the displayed items and we were encouraged to ask questions throughout the tour.  I found this tour very interesting and having grown up in the Mid Antrim area, I could connect to many of the stories.  Hearing about these noteworthy stories has inspired me to visit museums more often, taking in the rich history of the items showcased.

Included in the tour was a detailed explanation of the impressive installation space at the Mid Antrim Museum, spanning fourteen metres high.  Each illustration is based on a historical item connected to the museum.

After completing some initial drawing exercises, we selected our chosen illustration from the installation wall at the museum.  I selected the First World War Greatcoat that was possibly worn by a member of the 21st Foot Royal Scots Fusiliers.  Years later, it ended up on the bed of a lodger in Poplar Cottage.  I chose this item as I found it interesting how there was such a difference between what the coat was initially used for and where it ended up many years later.  I used the bright and energetic orange background colour to contrast with the neutral brown tones, providing visual interest. 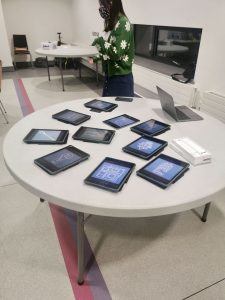 In the following weeks, I worked on illustrating and animating the greatcoat using Procreate.  In my animation, I wanted to show the greatcoat transforming from being worn by a member of the 21st Foot Royal Scots Fusiliers to ending up on a wooden bed, communicating the history of the greatcoat. 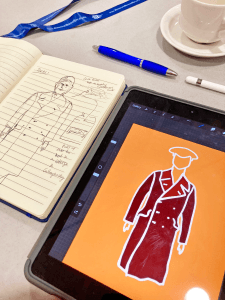 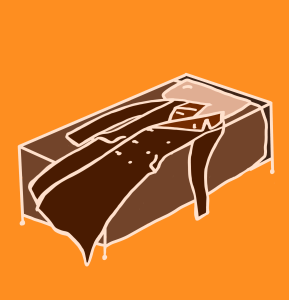 On the last day of the programme, we had a celebratory pizza party and were also able to try out our animations.  I held the iPad up to the original illustration of the greatcoat and my animation started to play – it was very rewarding to see the result!  We were also able to create vinyl stickers of our illustrations using the vinyl cutter machine and I loved this as I had never tried this technique before.  It was very interesting to see how the machine worked and I specifically chose the colour orange as it linked to my illustration. 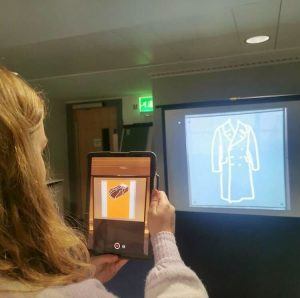 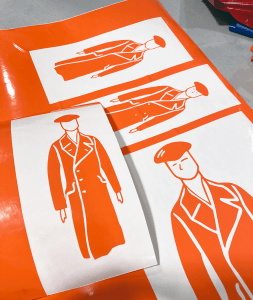 If you are thinking of attending a ‘Reimagine Remake Replay’ workshop, I would really encourage you to go for it! I really enjoyed meeting other young creatives, learning new techniques and overall, I had a brilliant time.  The RRR team are fantastic and make it a great experience to remember.  If you’d like to see some content from the programme, you can find some at the @reimagineremakereplay Instagram or on the ‘behind-the-scenes’ highlight on my @ljkdesigns_ Instagram account.

Big thank you to the ‘Reimagine Remake Replay’ team! 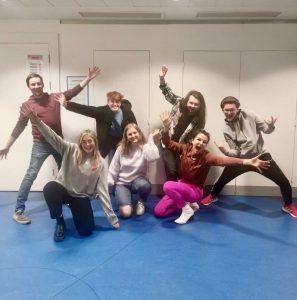