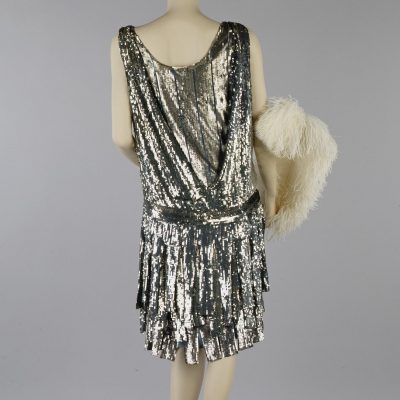 Despite the longer hemmed dresses of the previous decade, get-ups like these were all the rage in the 1920s. In fact, attire would have actually shown the knees, as well as being the bee’s knees! Dresses became shorter to allow women to kick up their heels while dancing the Charleston and other new dance crazes, thanks to the introduction of jazz music and radio broadcasts. However, by the mid-1920s, dresses had been simplified to suit the young and slim, and this 3 piece was no exception. Regardless, one thing is for certain – no matter what speakeasy the wearer may or may not have wandered into (depends who’s asking), they were sure to be a choice bit of calico. The sequins on this glad rag would have all peepers turning, as the lights would have reflected off them while the wearer was moving. Anyone would be a looker in one of these!

This piece was written by a participant on our Creative Writing Programme. It was inspired by the above piece, click the image to view it in the NMNI online collection. Read other works from the programme here: Virtually (Re)writing history: A series from our online creative writing programme