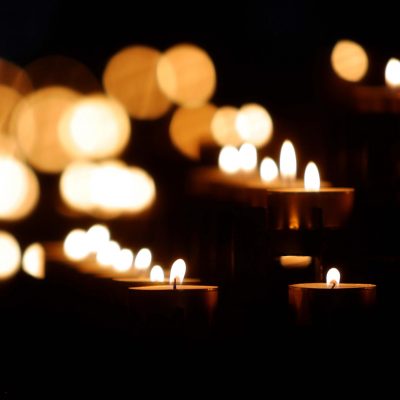 “This is my museum.” She says, softly. Slowly, the blindfolds is undone from behind me.

As my eyes adjust to the dimly lit space, I take in the smell. Musty and stifled, it owes a feeling of being underground.
It may well be.

Alongside this, my shirt clings to me tightly with humidity and sweat, amplifying the sense of claustrophobia.

The Louvre this is not, but this ‘museum’ is still unparalleled in the deep historical significance of its artifacts. The personal connection which this unassuming, elderly lady standing in front of me has with the collection, lends a sanctity to the experience which I am not likely to ever forget.

The owner, curator, and guide, who identifies herself only as Liù Sì (Six Four in English), steps towards her first piece on display.

It is of a white bandana, splattered with blood, once worn by a hunger striker.

The silence is tangible.

Looking around me now, the low-ceilinged room, perhaps 700 square feet all in all, is filled with the expectation not to even whisper but simply observe and reflect.

She stands staring at the piece, and I wonder where she has been transported. What thoughts must be going through her head every time she leads someone through her exhibition?

Next is a piece of metal, a scrap from one of the tanks that the CCP had sent in.

I remember reading that PLA soldiers had outgrown their weapons and tanks built to fit the average male thirty years ago, due to the improved nutritional standards that came with economic growth.

Now, I read “We want freedom of newspapers, freedoms of association, also to support the ‘World Economic Herald’ and support those just journalists” in Chinese from a placard, almost falling apart.

Noted below is that 15 out of 100 students from the nation’s top four universities know what the ‘Tank Man’ picture references.

Perhaps the incident’s only legacy is educational reform focused on spurring patriotism.

A Concert for Democracy in China 1989 promotional poster, equally as tattered as the placard, is framed on the concrete wall. On the line-up, Beyond, a Hong Kong band, is listed. I’ve seen videos of people singing one of their songs in their hometown recently. “Forgive me this life of uninhibited love and indulgence of freedom.”

A few pictures line the wall, with candles burning beneath to better illuminate the series of black and white photographs that show a child’s transformation into a young man.

Liù Sì lingers longer in front of this before turning to what is next.

Bullet cases from the incident are placed in a glass box on a pedestal next to a 3-foot replica of the Goddess of Democracy.
The original, standing at ten meters tall, was torn down by the troops on that day.

I spend another 15 minutes reading the descriptions, and it feels like a dream.

It’s as if I had just fell through the rabbit hole but, instead of Wonderland, ended up in a hellish reminder of the tragic consequences that government censorship can have on its people.

When I indicate that I am done looking at the exhibition, the blindfold goes back on and I feel myself being led out of the museum and back into the car.

After half an hour of bumpy roads and stop-starts with increasingly heavy traffic, the blindfolds are taken back off and I exit the car on the outskirts of Beijing.

Though often loud, the sea of urban noise with buses catapulting by, people chatting on their phones and hawkers shouting their wares, now rocks me and I stand still to take it in momentarily, before being pushed along into the flow of the crowd.

This is a review of an imaginary museum in Beijing dedicated to the Tiananmen Square Massacre of June the 4th, 1989. Due to government policy, the genocide is censored in China and is not covered in any school curricula. The mothers of those killed, such as the fictional Liù Sì, are not allowed to publicly mourn their murdered family members. Thus, the museum is more of a personal collection to remember her son, hidden away to avoid persecution from the authorities.

James Kynge (2019) The road not taken: China after Tiananmen. The Financial Times

This piece was written by a participant on our Creative Writing Programme. Read other works from the programme here: Virtually (Re)writing history: A series from our online creative writing programme