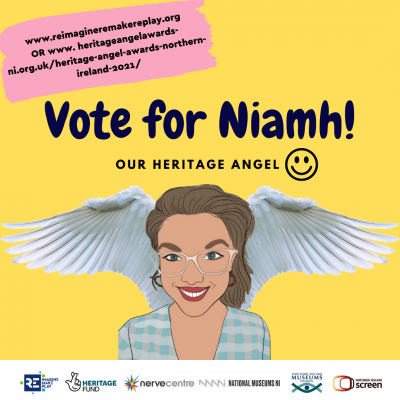 Reimagine Remake Replay’s very own one-woman dynamo & Youth ambassador Niamh Kelly has been nominated for this year’s Heritage Angel Awards in the Category Best Contribution to a Heritage Project by a young person.

Ulster Architectural Heritage has just announced that voting is now open for this year’s Heritage Angel Awards Public Vote, in association with the Irish News! Following a one-year break, the Heritage Angel Awards are back to celebrate important and inspiring heritage projects across Northern Ireland. The annual awards aim to celebrate unsung angels of local heritage- individuals or groups, who have rescued a historic building or site, worked as craftspeople or apprentices or recorded and interpreted a historic place.

The Heritage Angel Awards Northern Ireland are lead funded by the Andrew Lloyd Webber Foundation, with further support from the Department for Communities, the Construction Industry Training Board NI and Belfast City Council in 2021.

Niamh Kelly joined the project in October 2018 as a participant who impressed with her response to the  ‘youth-led’ ethos of the project, her infectious enthusiasm and creative input led to her securing a full-time paid role as the project’s Youth Ambassador in January 2020 and her contribution since has been monumental. Niamh has represented the project on numerous showcases, developed and led creative heritage programmes, organised youth-led online events, and has been instrumental in the creation of project steering groups which address specific interests of young people. As a culmination of her work, Niamh has also developed a Youth Manifesto for museums to commit to youth engagement, ensuring young people remain engaged with our heritage into the future.

UAH is now calling for members of the public to cast their vote for their choice from the shortlist online. Full details and films on each of the shortlisted nominees can be viewed at www.heritageangelawards-ni.org.uk. This is open until midnight on Sunday 14th November.

Cast your vote here!  *The voting form is at the bottom of the webpage.